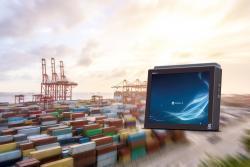 Växjö, Sweden, 14 September 2016   * * *   JLT Mobile Computers, a leading developer and manufacturer of reliable computers for demanding environments, has upgraded the VERSO+ 10 rugged computer’s processor to the quad-core Intel® E3845 (also known as Bay Trail). The new processor enhances the performance of the VERSO+ 10 computer by 2.5x compared to the processor used in older models. This computer comes with a QuickLock docking feature and is designed to meet the requirements of heavy-duty applications such as forestry, mining, ports and industrial, as well as the logistics and warehousing sector. The VERSO+ 10 computer and JLT’s other rugged computing products will be on show on the company’s booth at the Logistics and Distribution exhibition 2016, Stockholm, September 21-22 (Booth C:04B).

“Since introducing the VERSO+ 10 computer to the market in 2014, it has been appreciated by customers both within heavy-duty and logistics segments because of its compact format, flexible QuickLock feature and outstanding performance,” said Per Holmberg, CEO at JLT Mobile Computers. “The processor upgrade ensures the VERSO+ 10 computer retains its position as the industry leader in terms of performance in the rugged market.”

The upgrade means the VERSO+ 10 computer comes with two high performance processor options. The new model is equipped with a quad-core Intel® E3845 processor. For the most demanding applications, there is also the option to upgrade to the Intel Core™ i5-4300U (Haswell) processor to deliver the highest performance in the industry’s smallest rugged form factor.

Both versions of the VERSO+ 10 computer come with built-in WLAN PIFA dual diversity antennas which are custom-made for a reliable WiFi connection in environments with poor coverage. An optional sunlight-viewable XGA display is included, which features JLT PowerTouch™ projected capacitive touch (PCT) sensor technology, enabling a user experience similar to a consumer device in terms of responsiveness. The PowerTouch screen can be used with gloved or ungloved hands and is virtually unbreakable, providing the high reliability required for heavy-duty applications. The computer’s rugged case is the smallest in its class, making it ideal for installations in tight spaces, and its flush front makes it quick and simple to clean when used in the food and beverage processing industries.

The VERSO+ 10 computer comes with two different docking cradle options, either a general purpose heavy-duty cradle or a cradle specially optimized for logistics applications such as forklifts, picking trolleys and small truck cabins. Both cradles feature JLT’s QuickLock attachment mechanism which allows quick and easy dismounting for applications where the computer needs to be transferred between vehicles or removed for security reasons overnight.

As with all JLT rugged computers, the VERSO+ 10 computer comes with the optional JLT “no questions asked” JLT:Care service level agreement, which guarantees short repair times and the highest level of support to minimize down time at predictable cost, in the event of a computer problem. A three year warranty is included.

The VERSO+ 10 computer is available now with a normal lead time of 4 to 6 weeks.