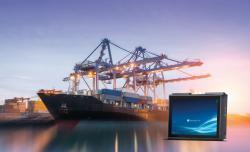 Växjö, Sweden, May 30th, 2017   * * *   JLT Mobile Computers, a leading developer and manufacturer of reliable computers for demanding environments, will be co-exhibiting with their long-time partner, IT systems integrator Autepra, at TOC Europe from 27-29 June 2017 in Amsterdam, The Netherlands.

Illustrating why it has such a significant global presence in multiple, high-profile ports and terminals, JLT will be showcasing its Navis-ready validated rugged computers at booth D6. Designed from the ground up to deliver optimum operational capabilities in demanding applications, the JLT computers leverage the latest industrial components to offer leading performance. Thanks to their rugged construction and proven reliability they deliver long operational life, even in tough environmental conditions and from the hottest to the coldest temperatures.

Of particular interest to port and terminal operators are the virtually unbreakable touchscreens available on several JLT computer models featuring the JLT PowerTouch™ display technology. These screens offer outstanding resistance to wear and tear, recognize touch input with gloves even in wet conditions, and reduce disruptive computer downtime. Combined with hardened glass, the deployment of capacitive touchscreens offers a feature-rich user experience – typically seen in consumer device displays – but with unparalleled durability. Meet with Peter Lundgren, JLT Business Development Executive for Ports, to find out more about the technical details of the new implementation, as well as the compelling reasons for industrial customers to choose such hardened rugged screens.

JLT has a history of delivering the very best rugged computing technology, reflected in many of its important customer applications, including Ports America, the largest terminal operator and stevedore in the US; the Port of Gdansk, the Baltic’s only deep-water terminal; Exolgan, the main port operator in Argentina and member of the Global PSA; terminal operator ITS; the Basra Gateway Terminal, operated by ICTSI; and several other ports in the Middle East. In all instances, rugged JLT technology has been chosen for its robustness, ease of use and integration capabilities. As the use of less robust hardware can cause unforeseen IT downtime, bringing major issues and increased costs, maximum reliability and suitability are paramount – especially when dealing with time-critical logistics operations. It is for these reasons that JLT is at the top of the list for port and terminal IT applications.

​Learn more about the event and schedule a meeting now »