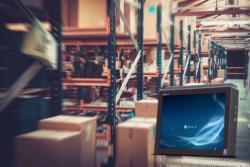 For its superior performance and compact form factor, the rugged VERSO+ 10 computer from JLT was chosen for use in the company’s U.S. warehouse

Chandler, Arizona, U.S., April 26th, 2017   * * *   JLT Mobile Computers, a leading developer and manufacturer of reliable computers for demanding environments, has successfully won a contract with a large global automaker for the JLT VERSO™+ 10 rugged computers. The ordered units will be used in the U.S. warehouse, one of the customer’s multiple production and distribution sites around the globe. The order positions JLT well for further expansion at the customer, as it is part of a greater roll-out of future installations.

“The compact VERSO+ 10 mobile computer represents a new class of rugged vehicle terminals, delivering the highest standard in terms of usability and reliability in the face of some of the industry’s harshest applications,” said Eric Miller, CEO of JLT Mobile Computers, Inc. “Having our VERSO+ 10 computer selected against strong competition from other well-established industry colleagues, demonstrates the great advantages of providing the most compact form factor in its class and outstanding performance, making it the ideal fit for use within the logistics segments.” With projective capacitive touch (PCT) screens featuring the virtually unbreakable JLT PowerTouch™ technology, the VERSO+ 10 computer offers users an interaction experience similar to that of consumer devices, but thanks to the addition of a 1.8 mm (0.07 in) thick, chemically toughened glass cover, the screens are far more resilient, making scratches, scuffs or even breakage a thing of the past. With resistive technology the plastic touch screen is one of the most common points of failure, thus the durability of the PCT screen brings increased productivity to organizations, as disruptive down time can be kept to a minimum. The PowerTouch technology also brings unmatched brightness and clarity to the screen and is ideal for use with virtual keyboard technology, giving users even greater flexibility in their logistics operations, yet sharing the capability of resistive touch screens that can be operated with gloves of different materials and thicknesses.

The VERSO+ 10 computer comes equipped with built-in, highly sensitive PIFA antennas for WiFi and Bluetooth to ensure reliable wireless communication over long distances in challenging environments, thus allowing higher service levels and greater customer satisfaction. Ready for the most demanding applications, the VERSO+ 10 is configured with an Intel® E3845 processor, 64-bit operating system and 4GB DDR3 RAM. The versatility of the VERSO+ 10 also enables the large automaker to streamline cross-docking operations thanks to the flexible QuickLock feature that allows the unit to be switched between vehicles and/or users.