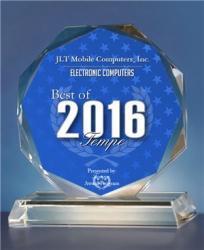 Tempe, Arizona, October 4, 2016   * * *   JLT Mobile Computers, a leading developer and manufacturer of reliable computers for demanding environments, has won the 2016 Best of Tempe Award in the category of Electronic Computers. Each year, the Tempe Award Program rewards local businesses that have achieved exceptional success in their category, enhancing the positive image of small businesses. Recognition is given to companies that have shown their ability to use best practices and implement programs to generate competitive advantages and long-term value.

“We are honored to receive this prestigious local award which highlights JLT’s ability to offer cutting edge rugged computer technology combined with continued excellence in technical customer support,” said Eric Miller, CEO, JLT Mobile Computers, Inc. “I would like to congratulate our team, whose dedication and hard work has contributed to JLT’s outstanding success in 2016.”

Tempe-based JLT Mobile Computers Inc., the North American subsidiary of JLT Mobile Computers in Växjö, Sweden, opened its doors in December 2014 and since then, has continued to grow and delivered strong results. In 2016 the company won a significant order for their rugged JLT1214P forklift computers from one of the largest transportation service providers in the world. For this order, JLT’s computer was selected because of its superior performance combined with the company’s ability to customize the solution to the customer’s specific technical and form factor requirements. The computers are used in the customer’s sites across the United States.

JLT Mobile Computers is a leading developer of rugged mobile computers for challenging environments such as military, logistics, transportation, offshore, mining, forestry and other industrial environments. JLT’s rugged computers resist dust, dirt, water, shock, vibration and extreme temperatures to provide the reliability needed for these difficult environments. All models feature JLT PowerTouch™ technology, a revolutionary rugged touch screen technology that provides a responsive, user-friendly experience with a gloved or ungloved hand, while being rugged enough to withstand even the most demanding environments.

The Tempe Award Program is an annual awards program honoring the achievements and accomplishments of local businesses throughout the Tempe area. Recognition is given to those companies that have shown the ability to use their best practices and implemented programs to generate competitive advantages and long-term value.