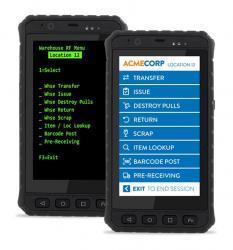 Växjö, Sweden, 14 March 2019   * * *   JLT Mobile Computers, a leading developer and manufacturer of reliable computers for demanding environments, today announced a new partnership with StayLinked, the leader in modern terminal emulation (TE) systems. To address the increasing need for reliable operations in challenging network environments, JLT is working closely together with StayLinked and provides the best terminal emulation solution with its mobile computers to customers around the world.

“Session persistence is essential for our customers to minimize dropped sessions and worker downtime, and to attain a high level of productivity,” says Per Holmberg, CEO of JLT Mobile Computers. “By offering the terminal emulation solution from StayLinked with our rugged mobile computers, customers will benefit not only from more reliable operations, but also from simplified migration to new devices and operating systems, with additional cost savings as a result.”

As the only terminal emulation product specifically designed for wireless environments, the StayLinked solution completely eliminates dropped sessions and ensures reliable operation in challenging network environments. The StayLinked SmartTE™ is at the forefront of migration to new operating systems in the supply chain as it easily transforms traditional terminal emulation screens into graphical, touch-based screens in the most time effective way.

“We are proud of our commitment to help customers in their migration to touch-only devices and modern operating systems,” said StayLinked President, Dan Hogan. “Using StayLinked SmartTE on rugged mobile devices from JLT enables customers to easily migrate and modernize their terminal emulation applications and, with StayLinked iQ, they gain deeper insights into their business processes.”

The unique architecture of StayLinked TE connects mobile devices to host-based applications such as Warehouse Management Systems (WMS) and Enterprise Resource Planning (ERP) systems in a very reliable, secure, and high-performance manner. StayLinked SmartTE delivers the best possible user experience on touch-only devices, allowing workers to utilize the entire screen without sacrificing usability for the sake of screen space. Customers retain all application functionality, which enables seamless migration to modern operating systems including Android and Windows 10 and new state-of-the-art computers from JLT without ever having to touch the host application.

Partnering with StayLinked illustrates and sustains a core ethos of JLT: its desire to increase business value and maximize ROI for its customers. The terminal emulation system is available for order from JLT today.