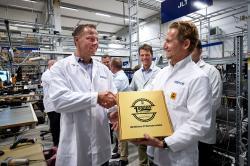 JLT Mobile Computers celebrates a significant milestone in its history, from pioneer to a recognized leader in the high-end rugged computer market, as the 100,000th unit rolls off its production line

Växjö, Sweden, 4th October 2017   * * *   JLT Mobile Computers, a leading developer and manufacturer of reliable computers for demanding environments, has reached a significant milestone in its company history with the production of the 100,000th rugged computer. The celebratory unit was presented in person to Mikael Hofflander, Project Manager, Volvo Car Body Components, by Per Holmberg, CEO, JLT Mobile Computers, during a ceremony at the JLT production site in Ronneby, Sweden.

“Together with our customer Volvo Car Body Components, we thoroughly defined the requirements for the IT solution that would equip their forklifts, and agreed that reliability was of utmost importance since unplanned downtime disrupts business, and every minute of unavailability increases their costs,” explained Per Redenius, Key Account Manager at logistics solution provider and JLT sales partner Idnet. “That is why we recommended JLT’s rugged computers; they provide the best performance and reliability on the market.”

Ever since JLT pioneered the rugged computer market with its foundation in 1994, ruggedness, performance and reliability have formed the corner stones of JLT’s quality philosophy. After the recession in 2009, the company embarked on a strategy to take a leading position in the high-end of the market, focusing on segments where reliability, performance and ruggedness are imperative criteria. In 2014, JLT ramped up its US establishment with its own subsidiary in Chandler, AZ. As a result of the strategic shift and the US presence, the company’s operating margin went from negative to positive and since 2013 the turnover has doubled and operating results have increased more than ten times.

“Working our way back from the recession in 2009, we have expanded our market share and established ourselves as a leader in the high-end segment by focusing on reliability and performance,” said Per Holmberg, CEO, JLT Mobile Computers. “This makes delivering the 100,000th JLT computer all the more special, and by adding a 100,000-hour warranty we truly emphasise our commitment to outstanding quality for many years to come.” 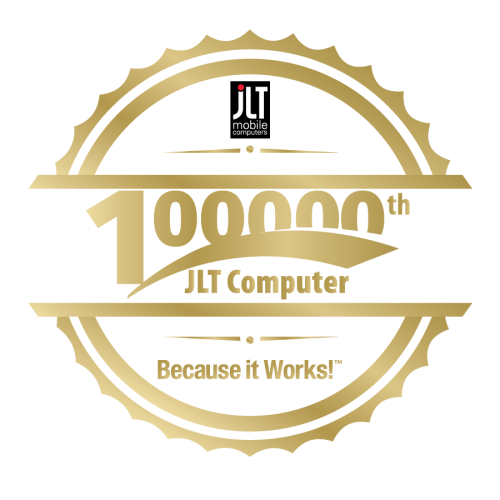