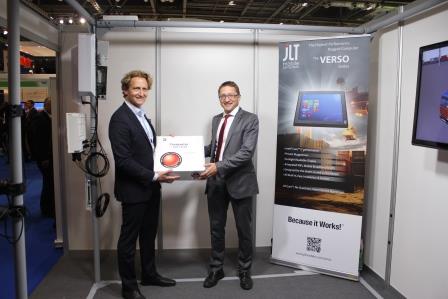 Leader in Ruggedized PCs Commemorates 20 Years in Business by Delivering its 90,000th Computer with a 20-Year Service Agreement

Växjö, Sweden, 26 June 2014 * * * JLT Mobile Computers, developer of rugged computers for demanding environments, is celebrating 20 years of delivering the industry's most rugged computers by awarding the customer of its 90,000th computer with a specially extended 20-Year JLT:Care Service Agreement. It reflects the quality built into every single PC the company manufactures, with many of the very first models still being used today. The 90,000th computer with the 20-year service agreement was 'delivered' during a special ceremony to Baltic Container Terminal (BCT) Gdynia, part of the international port management group ICTSI, at the trade event TOC Europe in London this week.

Established in 1994, JLT has grown to become one of Sweden's largest PC manufacturer based on computers shipped and remains an independent, publicly-traded company. JLT pioneered the rugged computer market, shaping it over the last 20 years by instigating and championing a level of design and manufacturing quality demanded by the leaders in the world's toughest end-markets, including drilling, mining, construction, ports and international logistics. Every rugged computer delivered by JLT is manufactured in Sweden and comes with a standard 3-Year Limited Warranty. The computers are also available with an optional 3- or 5-year "No-Questions Asked" JLT:Care Service Agreement.

JLT has been at the forefront of rugged design since its inception in 1994, when it started building electronic control systems for the Swedish forestry industry. Today the company is selling its rugged computers under the JLT brand as well as being the Original Design Manufacturer (ODM) for several leading logistic and transport IT companies. On of these companies is DAP Technologies in the USA.

"With the technology from JLT Mobile Computers, we have been delivering rugged computers to many global blue chip companies," said Eric Miller, VP of Sales at DAP Technologies. "The JLT computers are appreciated by our customers for their high-performance and reliability."

JLT has a long history of developing and implementing a range of proven techniques for mitigating against mechanical stress and fatigue, ensuring ingression protection and delivering reliable operation in extreme temperatures. Today, all of JLT's expertise is built into every single PC it manufactures, which is why it is the only rugged computer manufacturer in the world prepared to give away a 20-Year Service Agreement.

"We're incredibly proud to have been at the leading edge of the rugged computer market for its entirety," said Per Holmberg, CEO at JLT. "With this ceremonial Service Agreement we're stating our intention to leading it for another 20 years!"

JLT Mobile Computers is a leading developer of rugged mobile computers for demanding environments. These PC-type computers are developed and manufactured in Sweden for professional use and are characterized by very high reliability in the face of moisture, dust, vibration, electromagnetic fields or extreme temperature - reliability that is required for use in areas such as transportation, warehousing / logistics, forestry, mining, automation, military and rescue vehicles. JLT operates globally with sales partners, primarily in Europe and the United States, and has delivered over 90,000 PCs. JLT's turnover in 2013 was SEK 61 million. The headquarters in Växjö, Sweden houses the development, service and administration departments. The company was founded in 1994 and since 2002 has been listed on the NASDAQ OMX, First North, under the symbol JLT by Remium as Certified Advisor. For additional information, please visit www.jltmobile.com.