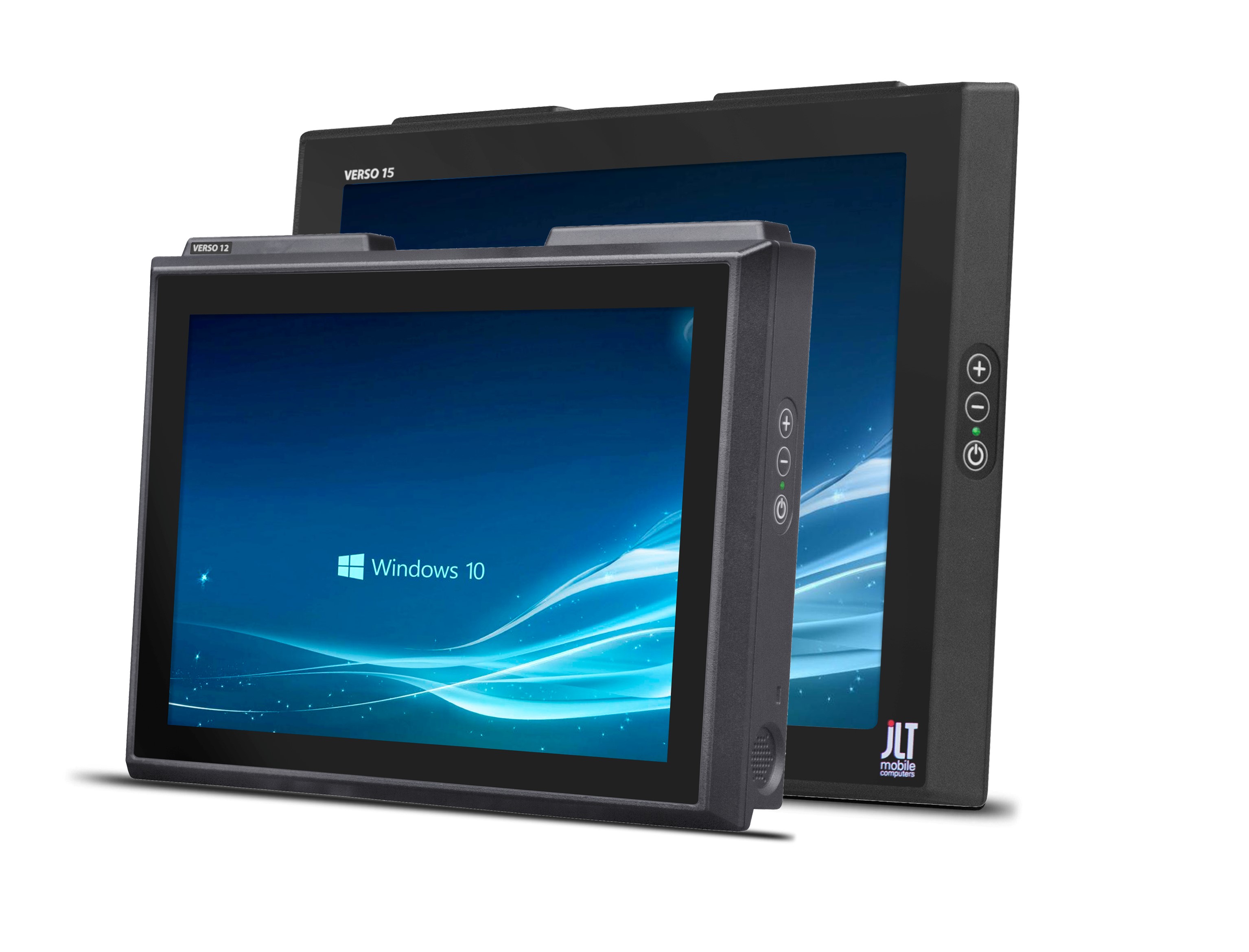 Combination of market leading performance and ruggedness improves productivity in the most difficult environments such as mines, agriculture, maritime, and port applications

Växjö, Sweden, October 8, 2015 * * * JLT Mobile Computers, Swedish developer and manufacturer of reliable computers for demanding environments, today announced an upgrade of all processor alternatives for its VERSO(TM) Series of heavy-duty rugged computers. The higher-performance VERSO computers can run 64-bit thick-client applications including full desktop environments with security software, as well as advanced applications standalone without continuous access to the cloud, for use in areas without a reliable internet connection. In addition, the 12" VERSO 12 computer's touch display has been upgraded to feature the new JLT Rugged PCT(TM) technology that uniquely integrates the latest generation PCT (Projective Capacitive Touch) to provide an unparalleled level of durability. The combination of enhanced processing power and PCT screen improves responsiveness and enables a more intuitive, user-friendly interface, increasing users' productivity. The VERSO Series is designed for heavy duty applications such as mining, agriculture, forestry, oil and gas, defense, maritime and offshore, container terminals and yard logistics applications.

Both the VERSO 12 and VERSO 15 rugged computers now come with two high performance processor options. The base model's processor has been upgraded to the quad-core Intel® E3845 (also known as Bay Trail), providing a 2.5x performance increase over its predecessor. For the most demanding applications, the VERSO 12 and VERSO 15 computers can also be specified with the Intel Core(TM) i5-4300U processor (also known as Haswell) providing a 2.5 to 4.0 times performance increase over its predecessor.

In addition, the touch screen of the VERSO 12 rugged computer has been upgraded with the JLT Rugged PCT technology which provides responsiveness and user experience similar to those used in consumer electronics, yet supporting a wide range of use cases, including use with different types of gloves, in freezer environments and wet conditions. With a thick protective glass covering which is practically unbreakable it has outstanding resistance to wear and tear, eliminating problems with scratched or broken screens which can result in operational disruption.

All models in the VERSO Series can optionally be fitted with 4G LTE WAN connectivity, with the capability to fall back to 3G and GSM when necessary. Assisted GPS/GLONASS support is also optional. The VERSO Series comes with dual-band 802.11ac WLAN and Bluetooth EDR 4.0 connectivity as standard, with both radios taking advantage of custom-designed highly sensitive PIFA (planar inverted-F antenna) technology for reliable connections in environments with poor coverage. Built-in features include a backup battery with a 9-36V DC-DC converter for uninterrupted operation, even during power outages.

As with all JLT rugged computers, the VERSO Series comes with the JLT "no questions asked" JLT:Care service level agreement, which guarantees short repair times and the highest level of support to minimize down time at predictable cost, in the event of a computer problem.

Units of the upgraded VERSO Series are available for customer evaluations and tests today, and the complete family will be rolling out in production throughout the remainder of the year.

JLT Mobile Computers is a leading developer of rugged mobile computers for demanding environments. These PC-type computers are developed and manufactured in Sweden for professional use and are characterized by very high reliability in the face of moisture, dust, vibration, electromagnetic fields or extreme temperature - reliability that is required for use in areas such as transportation, warehousing / logistics, forestry, mining, automation, military and rescue vehicles. JLT operates globally with offices in Sweden and the US, complemented by a network of sales partners that provide complete solutions and local support. JLT has delivered over 90,000 PCs since its inception and the company's turnover in 2014 was SEK 72 million. The headquarters in Växjö, Sweden houses the development, service and administration departments. The company was founded in 1994 and since 2002 has been listed on the NASDAQ OMX, First North, under the symbol JLT by Remium as Certified Advisor. For additional information, please visit www.jltmobile.com.